I arrived in Finland in 2006 and joined the rugby club of Helsinki right away. After several months in the club I decided to take care of the organisation and the promotion of the annual tournament of the club.

I had several ideas in mind:

To make it bigger there was not many options, we needed to invite teams from other countries. Indeed with only 10 clubs and 12 teams in Finland the capacity is very limited. The promotion of the tournament mostly took place on the web with online invitation and emailing, forum posts and social online networking.

It works pretty well with a total number of 12 men teams and 3 women teams coming from 5 countries (Finland, UK, Moldavia, Estonia and Sweden).

To make it nicer we decided to really emphasize on the party side. That was a mild success if not counting the startup of the tournament which was amazing. I decided to hold a drinking contest on the night before the tournament to decide which teams would start playing first in the morning. Almost all the teams came to compete in a bar downtown. The bar was completely full and the atmosphere was great. Also we decided to introduce a prize money for the winners of the tournament.

The tournament was won by the Moldovian team against the team from UK (Wan Chai Wanderers).

In order to organise the tournament properly I’ve been greatly helped by Palemia Field, another prop coming from New Zealand who managed the organisation of the games and Thierry Demoulin, a fellow frenchman who’s dealing with the local administration (Liikuntavirasto) to get the pitches. 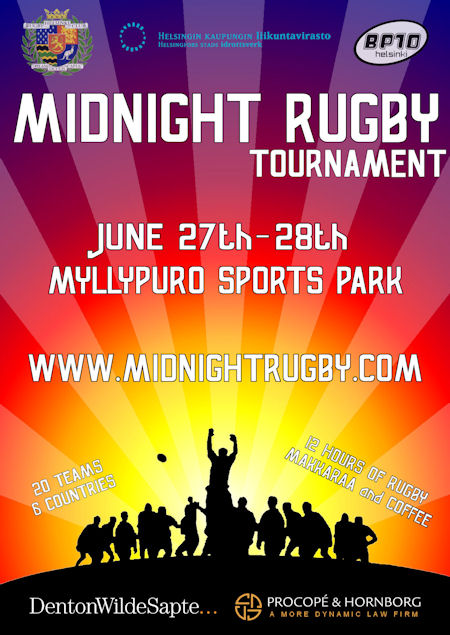 After a successfull edition in 2007, I decided to do it again in 2008. This time in order to get more teams and an even better atmosphere I decided to move the tournament to another date. We got on board the chairman of the club StephenThe Baltic Plate initially took place in late September at the end of the Finnish season. Weighing the pros and the cons, it didn’t take me long to choose another date. What’s the big deal about Finland? The Winter? Yes for sure, but for rugby it’s a bit tough and that already exist in two other places. The Summer then? Hell yeah! Let’s market the Midnight Rugby Tournament and make it a real Finnish event. We’re going to move it close to Juhannus, the midsummer celebration. the date was then set to June 26th-28th.

What do we need?

The team got bigger that year with mainly one new big player. Andrew Cotton a lawyer in a local law firm was keen on developing his business and extending his relationship with some partners in the UK. Having that in mind he setup the perfect party plan for the full weekend and invited the team of the said partner and gathered some sponsorship money.

Also I managed to get a very good grant from the Ministry of Education of Finland and a grant from the departement of Sports of the City of Helsinki.

The 2008 tournament saw 15 men teams coming from 6 countries. France, UK, Italy, Russia, Estonia and Finland. The women tournament didn’t really happened this year if not counting the friendly game that happened during the Saturday afternoon between the Blue chicks and the Yellow chicks…

So we had a first ad-hoc opening party at the Aussie bar which happend to celebrate their 2nd birthday on the Thursday 26th June. Unfortunately for the guys at the Aussie bar which don’t really like french people the bar was filled in with at least 150 french rugby players. A very good start followed by a night at Kaarle XII, one of the best bar in Helsinki.

On the Friday afternoon, we kicked-off the tournament at 16:00 and we took the players to the third half place on the Friday night on a little island in the south of Helsinki (Uunisaari). The island featured a beach, three saunas two bars and a buffet. Everybody was happy.

On the Saturday we started the finals at 11:00. Everything worked like a charm. We had a sauna on the side of the pitch. A 30 meters belly sliding contest was organised and the Swedish speaking TV YLE FST5 came to shoot some footages.

Saturday night was the big party. We went to Kaivohuone, the place to be seen in Helsinki. With about 300 thirsty rugby players, the party would surely be good… and it was. Indeed on that night, several NHL stars came to party. When that happens, the fans of these guys usually come to party as well. So there was easily a ratio of two girls per guy… Once again, everybody was happy.

The winners of the tournament was the team of the sponsor.

The budget of the tournament was over 15 000 euros.

I decided I wouldn’t be the main organiser of the tournament for the year 2009. The main reason is I traveled around the world with my girlfriend during that summer. The girlfriend became the wife.
That edition was another success with more teams turning up and still the same spirit.

The edition 2010 was another large success. The tournament is now on a very good track. That year I took only a small part in the organisation because I was just about to leave for a 6 months assignment in the US (Texas)
The winners of the tournament were "les Kebabs" from Drancy. A team made of players from the team of Rugby club Drancéen in France.

The edition 2011 was another success with a different team this time. The new management of the club decided to take care of the organization. This came at the right time since most of the historical organizers (Me, Palemia Field who is now the Finnish Rugby Federation chairman and a daddy, Stephen Whittaker who’s the Finnish Federation vice-chairman and the team manager of the national team) were lacking time.
The winners are the Warriors Rugby Club from Helsinki who had an incredible season 2011. They won the domestic championship, men and ladies, and the Midnight Rugby.