Here is the map.

Iran is surrounded by several countries. Turkey, Iraq, Azerbaijan, Pakistan, Afghanistan, Turkmenistan, and across the golf, Saudi, the Emirates and a few other tiny ones.

What  I have seen from Iran is rather discomforting.  I haven’t been speaking to a single person who approves the politic of the country. My trainees for most of them were not really religious. One out of four was actually praying during the day. The others were just officially Muslim like I am Christian. Never go to the church, don’t really believe in any real god, some have a different take on religion at bit like me, but that’s it. So of course they are not happy that their government is trying to impose Islam to everyone. Unfortunately this is one of the things that is really happening. The law in Iran is the Islamic law. What we call in the western world “Sharia”. The truth is Sharia, or Shari’ah is just an Arabic word that means “religion”. So it’s like the religious law.

One of my trainees is fleeing the country. Immigrating to Canada. He just got the coveted PR (Permanent Residency). It took him 7 years to get it. You can guess how motivated he is.

I had 2 female trainees and like every women in Iran they HAVE to cover their hair. The women of this country have quickly realized that the amount of hair covered was a powerful way to demonstrate how much religious you were and how much you agreed with the politic of the government. The one praying was covering all her head. The other one was covering only half of it and she confessed that she hated to wear the veil. But it was the law and the risks were too big. Many women have been beaten up sometimes to death. The other problem is that on the other side it not so easy to distinguish which men want to see women covering their head and which ones don’t care. So to take no risk and to avoid being reported by someone, the women of Iran just cover their hair all the time when they are in public.

I have noticed several times some woman putting their veil back when having to be in public. For example at my hotel once I saw the receptionist coming back from some backroom without the veil and quickly putting it back. I could clearly guess that this one was thinking like my protesting trainee.

When going in the streets you can see different levels of hair coverage, from the most extreme to the most liberal or demonstrating. Some women even wear the Niqab, the integral veil that shows only the eyes of the beholder. From a westerner point of view this is by far the most repulsive one. It is even almost impossible to know who you are talking too. However after several trips to Egypt and speaking with colleagues, I learned that the Niqab is actually more of a cultural thing than a religious outfit. Still it stays an outrageous way to display women. If at least their creativity and emotions could be expressed by different patterns and colors on the fabric it would make it a wee bit more human. But the Niqabs are always pitch black. In countries like in the Middle East, this is also cruel. Guess which color is the worst one to wear under the scorching sun when it’s 50 C.

Some women don’t go the extra mile and simply wear the veil covering all their hair simply. That is what the law requires. Many are wearing it that way not really by conviction but more because they are afraid of the government. But many more are wearing it to be classified as a good citizen. In a country where corruption is an art de vivre you want to put every chance by your side to make things happen. Building permits, visas, various licenses…

But most women don’t think like that. Most women are covering only partly their head. Some even cover the very bottom of their hair. Those usually also try to dress up in a provocative way. Of course what I call provocative in Iran would be very conservative in Europe.

I have been speaking with my trainees about how I felt about their country and we’ve had some long interesting conversations. I told them that for the first time, after going to so many countries, I felt sad. The atmosphere, the lack of freedom, the constant pressure from the government to apply strictly some rules made up from a book 1600 year old. That made me sad. The hunger, the starvation for freedom of the Iranians. Rules which have been made up for most of them. Of course this is not a critic of Islam. It is just a critic of the way the government is using Islam to apply its power on the people of Iran. Christianity has the same sort of non-sense. I don’t know much about other religions but I am sure there are some things which are about as credible as Angry Bird.

Yes this country was affecting me a way that I had never felt before when visiting a country. Of course I was touched when seeing little kids playing naked in dirty mud in India in a slum next to my luxurious hotel. I felt terrible when we went to Mongolia and met this family of parentless kids all underage, left alone by an alcoholic dad and a mom who followed some dude. This family on top of that lost everything in a flash flood. Their Ger was destroyed, their fence was gone, even their dog escaped and was never found. That said I felt great knowing that we helped them to build their fence around their piece of land.

Another gigantic problem in Iran is the manipulation of the media and the filtering of the internet. The government is using traffic shaping in order to reduce the priority of encrypted protocols. Guess which company sold them the solution to do this… You would think the government would be thankful and would let NSN use encrypted protocols to connect abroad and continue working. But no. Lately it became illegal to use Cisco VPN combined with RSA SecurID. So NSN is now using an SSL encryption to connect the workers to the intranet. Why SSL? Because the servers of the government can very easily decrypt the frames and see what is going on. They like to know everything. They are also listening to phone calls, reading SMS, reading emails…

Right now about only 15% of the traffic is dedicated to encrypted protocols. What cannot be decrypted is illegal. Loads of websites are filtered. No youtube. No Twitter. Facebook is working sporadically. In this world filtering the internet is really a very dirty hit at freedom.

So people are trying to go around the filtering by using proxies and VPN. But with traffic shaping it makes it extremely slow. Especially because a lot of Iranian internet users are doing it.

There are free VPN, free proxies but if you want to get something efficient you need to pay for a good service. There are service like “Hide My Ass” which is very good, but Iranians cannot buy it. Why? Because they get beaten up from the left and from the right at the same time. Their government is annoying the living hell out of them and they are in a sanctioned country which means that foreign companies are not allowed to sell them anything except under certain specific circumstances.

I tried to setup an HMA account while I was there and I got my Paypal account blocked because they were suspecting a fraud. There was lots of ways to pay for the account. All of them declined because I was in Iran. The ironic thing about this tool is that it specifically made for people who are in this situation and yet they can’t use it except if they can find some help from someone outside of the country.

So basically the Iranians are constantly struggling to do what they want. A colleague told me that he and his girlfriend went to jail once specifically because they were dating. This is forbidden. If you want sex, you have to be married. How did they know they’ve ever had sex, nobody knows. And this is also one of the problems. It is not really advised to trust the police with your life. Whatever they say they are right and if they decided that you are wrong, there is little chance you will get a chance to defend yourself.

After a week there, some laughter, some annoyance, some worries, I must say I felt quite relieved to get out of there. I have been worried on the first minutes of my arrival at the border check, wondering if they would detain me for no reason. And I have been extremely worried of being detained on the way out, wondering if they had been checking out what I had been up to, wondering if I had broken a law I didn’t know about. I was seriously quite worried. But after queuing in the most unorganized way ever at the security check of the airport, after checking in with Emirates and queuing again for 20 minutes at the border control I finally got my stamp and earned the right to bugger off. That said I didn’t celebrate until the plane took off.

On my way was Dubai. It’s a bit the Las Vegas of Middle East. So I thought.

After taking a long cab ride to see the main landmarks like Burj Al Arab, the Palm, the Burj Khalifa, Dubai is light years ahead of Las Vegas in terms of craziness. No more covered hair, western style provocative dressing, mini-skirts and cleavages. Huge contrast. 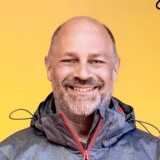